There is nothing more delicious than this decadently healthy twist on French Toast with fresh seasonal berries.  In case you didn’t fully indulge on Mother’s Day, here’s a great recipe for you to enjoy…  Bon Appetit! 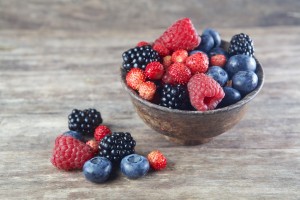 3 or 4 fresh organic strawberries, cut in half

1. In a blender, combine the cashews, water, almond milk, vanilla, cinnamon, nutmeg and salt. Blend until smooth. Transfer to a bowl.

3. Dip both sides of the bread into the cashew mixture. Cook on each side until golden brown.

4. Top with coconut cream, fresh organic berries and a drizzle of maple syrup.

Sylvaine N. Hughson, an Executive Health & Lifestyle Coach®, is the Founder and Director of SNH – The Art & Science of Optimized Living®. As the Principal Coach and Consultant for SNH, Sylvaine works closely with high-level professionals, performance-driven groups, and Fortune 500 companies. She helps her clients unleash the power of optimized mindset, wellness & lifestyle to fuel their peak performance and accomplish their most important goals.. Read More